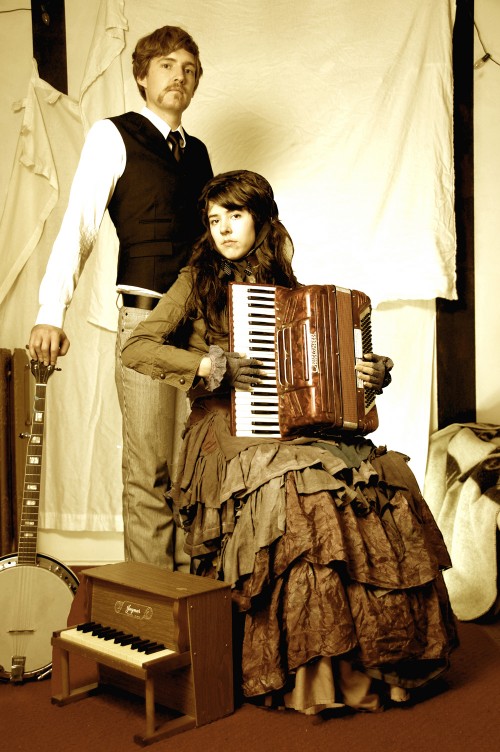 Haun’s Mill is certainly a unique addition to Linescratchers. Part husband-and-wife acoustic folk duo, part performance artists, part historians, part film-makers, Eliza Wren and Nord Anderson take listeners back to darker, but not different, times in our country’s history. From the Spanish Flu outbreak, to quiet, intimacy in poverty, to the Great Depression, these stories and themes find a new, added relevance in our society today. Highly recommended.

So for the record, you two are husband and wife?
N&E: Yes.

Our other favorite husband-and-wife duo, and the inspiration for Linescratchers, is Alan Sparhawk and Mimi Parker of Low. Are you familiar with Low?
E: Funny, we just recently discovered them – I’d heard of them a bit before but didn’t know so much about them – nice stuff!

Is playing in a band your full time job then, or do you have day jobs?
N: Ha! That’s the goal, to not have day jobs. I quit the job I had for 8 yrs. so we could move to Austin & do more music. Here in Austin I got another day job – but yes, full-time music is the goal.

Some might say that combining a marriage with a music career might be an added stress to the marriage, but there are of course several examples of successful couples that make it work. How do you navigate these tricky waters?
E: I actually think it’s easier in our case. We get along really well & are always around to rehearse whenever (as long as the baby isn’t trying to strum the guitars or climb into the bass drum). Also, I think the band is basically all about our relationship – it couldn’t exist without it & we value what time we have together – it seems like it’s never enough.
N: We were both musicians before we met so it only made sense to work together. Creating music is what we love to do, managing the band is the stressful part.

The first thing interested listeners may notice about Haun’s Mill is that you have combined musical performances with film projections and costumes. What gave you the inspiration for this? Do you think your music works by itself, or do you think the stage show is an integral part of the experience?
N: We wanted to create an experience and atmosphere as the backdrop to our sound so that our live performances were something more than just repeating what was on our album. The songs are the most important element and our hope is that they magnify the stage show.

Your fans love you for your unique take on American history through your music. Why have you chosen to write music about the darker times of the past?
E: I feel like the harder events in both American History & people’s personal history are the most interesting – this is what builds character, not just having a perfectly happy life where nothing goes wrong.
N: I’m inspired by the great music storytellers such as Woody Guthrie, Leadbelly, and Johnny Cash to name a few. In a similar vein, we’re trying to tell stories and the best ones involve darkness, danger, struggle, etc.

Your website mentions that modern listeners might actually connect to those troubled times right now.
E: I know it’s generic to say, but history does repeat itself. The swine flu was the same flu of 1918. Coincidentally, our song, “The Flu”, was written just as the new swine flu started. And for the most part our songs could very well be about today. Nord’s “Mt. Pleasant” song was about a three-way murder in the small Utah town of Mt. Pleasant – after the song was recorded a three-way murder with a similar story happened there in Mt. Pleasant.

What albums or EPs has Haun’s Mill released? Any plans for future releases?
E: We had a very early, limited release of Haun’s Mill as a duo – it was recorded by us at home. We then had a more official release of a full band album we recorded at Audiospace Studio just before we moved from Utah. This summer we will be recording our next (and full band) album.

Both of you, Eliza and Nord, have had previous solo music experience. What do you both bring to the table and how do you combine your respective styles and influences?
E: So far all of the songs Nord writes he sings & all of the songs I write, I sing – this has just been a natural choice & I think gives our band more variety. Nord is a history major & I’m a film major. We have different musical strengths (this also applies to our relationship very much so – in many ways we’re opposite). Nord is a better guitar player & has more contemplative and historical lyrics and I’m a better songwriter and singer and everything else… just kidding.

Does Eliza perform solo still or have you put all your efforts into Haun’s Mill?
E: I still perform solo occasionally, but had recently completed my ELiZA WREN “Thesis” project “Returns to Oz” (an original rock score that syncs with the 1985 film, Return to Oz – very similar to Pink Floyd’s Dark Side of the Rainbow project) which took a lot out of me (3 yrs in the studio syncing cymbal hits and banjo strums to actions in the movie)- so I inadvertantly took a break from it afterword to refresh my mind & have a baby (I was pregnant at the time of the big Sundance release of the project). And I’ve been so inspired and excited by Haun’s Mill that it has taken the front seat in my music.

Your group was previously known by the full name Haun’s Mill Massacre, the bloody Mormon historical event when Mormons were attacked by a mob in Missouri in 1838, but you’ve shortened it to Haun’s Mill. Is there a reason why?
E: Haun’s Mill just seemed to make more sense for a lot of reasons & we believed this enough to go to the trouble to change it – which has actually been difficult – some fans had trouble refinding us with our new name & we had to redirect our website info etc. For one thing “Massacre” actually pinned us as heavy metal to many people before they heard us, plus it clouded our more upbeat songs.

Do you plan on any bigger tours in the immediate future?
N: We do plan to go “all out” with the release of our new album in the Fall of this year – so yes.

Where can interested readers find out more about Huan’s Mill shows or music?
N&E: Everything they need can be found at www.haunsmill.com