What’s going on? Click HERE for an explanation and part I, here for part 3, and here for part 4. I should mention that the title of this series come from this delightful sketch on Conan. ❤ Conan. 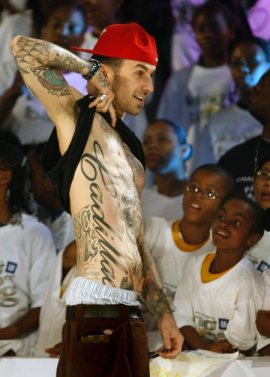 Mormonosity: 1.5/10 Probably not, but the lyrics are just ambiguous enough that it’s (kinda) possible.

Quality: 6/10. Sure. New wavey contemporary brit-pop with some melodramatic vocal flairs and a little dark tinge of suicide and damnation at the end. These guys aren’t singing about Joseph Smith, but it seems like they might worship at the temple of 90s Radiohead.

Highlight: I can appreciate a good story arc in a song and the angel/devil choir is a nice touch.

Things get weird when: The lyrics take a turn for the Latin, and then the devils pretend to be angels to (briefly) fake out the recently suicided before welcoming him to Hell.

Likelihood of being played at a Mormon dance: 6/10. On the plus side, all the reference to Hell are in Latin so they wouldn’t get screened out. However, it’s too fast for a slow song and too slow for a fast song.

Mormonosity: 10/10. This is a spoken word track, and it’s definitely Frank Zappa talking about his experience playing a Mormon Dance. You can tell because he notes that the dance was held in the presence of a basketball court with elaborate decorations to make you forget it was a basketball court.

Quality: 6/10 The track is a bit of a throwaway but it blows my mind that a group of Mormons got to see Frank Zappa at a stake dance in 1962.

Highlight: “Ray told me, he says, you shouldn’t smoke when you go there, man, they don’t like it, so I said, aw man, he’s just being too cautious ’cause he’s a pretty tame guy.”

Things get weird when: I guess the part where FRANK ZAPPA PLAYED  A STAKE DANCE. Did you ever get a live band at a dance? The closest we got was our high school’s jazz band, some years before I was old enough to go to dances. A member of the band’s car got broken into in the parking lot and the band director swore to never come back to our church.

Likelihood of being played at a Mormon dance: 0/10. Dances tend to have lots of “lovely lights” and “big crystal punchbowls”, but there is very little spoken word about Mormon dances at Mormon dances. We haven’t reached that level of self-awareness yet.

Mormonosity: 1/10. The title could as easily refer to the Mormond Hills in Scotland (thanks, Nate!) as the church.

Quality: 6/10. On paper, I’d never want to listen to instrumental synthesizer, piano, and casiotone beats but in practice I could see myself listening to it while I jazzercize or something.

Likelihood of being played at a Mormon dance: 7/10 If you were in a particularly nerdy stake, sure.

#9 Where the Streets Have No Name by U2

Mormonosity: 0/10.  I included this one just to crush dreams.

Highlight: Okay, okay, okay, I’ll indulge this theory in 50 words or less. Place where streets have no name? It’s SLC because they’re on a numbered grid system. “A place high on a desert plain”? Check (sorta, it’s more mountainy than plainy). And unless Bono’s desire to reach out and touch a flame relates to the freaky flaming smokestack that you can see off the I-15, that’s it.

Things get weird when: Never. It’s U2. They’re about as weird as a wonder bread & kraft singles sandwich.

Likelihood of being played at a Mormon dance: 10/10. Can’t dance to it, but that doesn’t seem to matter.

#10 Sure Shot by The Beastie Boys

Mormonosity: Okay, hear me out here. By the time the Beastie Boys released Ill Communication, they’d already through on a long, strange metamorphosis in which they began life as a hardcore punk band from NYC and stopped briefly in the MTV ghetto as frat boy “Hey, I’m white!” rappers ripping off RUN-DMC. Post License to Ill, the three bad brothers decided to gain some knowledge in order to drop some. They enrolled at NYU and their efforts to improve themselves were dramatically evident on their next album, Paul’s Boutique. Musically, the group went from Frat-DMC to layering samples and engineering beats in ways that had never been done before. Lyrically, they retained their juvenile antics but this time they wove a US pop-culture pastiche of a thesis throughout, with a heavy focus on the ’70s. But they also threw in their notes from class and self-consciously “expanded the minds and expanded the parameters” by referencing Issac Newton, Ben Franklin, MesoAmerican folk religion, Ponce De Leon, the Theory of Relativity, and also Robotron,  fellow rappers EMD and RUN DMC, and Muhammad Ali all in the SAME SONG. They upped their wordplay game considerably and improved their music on every level. The fans reaction? Mass exodus. But the BBoys didn’t retreat to the level of the lowest common denominator audience member after upping the ante considerably and receiving a popular vote smackdown (a example that some bands that came much later sadly did not follow ahem*weezer*ahem). They didn’t even tread artistic water, delivering Paul’s Boutique II and hoping that audiences liked it better the second time. No, they pushed their music to the next level by actually playing their own instruments, revisiting roots by playing some straight-ahead hardcore songs, making lyrics and references even more dense and expansive, and starting their own record label and releasing it themselves.  What happened? Check Your Head went double platinum and the Beastie Boys had license to do whatever they wanted for the rest of their careers on their own terms. By the time Ill Communication came out, the Beastie Boys were on top as crossover superstars who innovative both musically and lyrically. Before reading further, click on the link in the title and listen to the song, particularly from the 1:40 to the 1:50 mark. The point?

IT IS ENTIRELY POSSIBLE THAT THE BEASTIE BOYS NAME CHECK JOSEPH SMITH BIOGRAPHER FAWN BRODIE IN THIS SONG.

They had enough education and liked making obscure enough references that if any mainstream rapper in the 90s was going to name check Fawn Brodie, it’s these guys. Yes, you’re right… it didn’t happen. He says he’s like Vaughn Bodie, and furthermore, though it sounds more like Fawn Brodie than Vaughn Bodie, I don’t know that Fawn Brodie was thought of as a “Cheech Wizard.” (Bodie is an underground comic artist whose most famous character was the aforementioned Wizard.)

Still. I heard it as Fawn Brodie and I still do. And I thought that was a pretty hardcore claim for a rapper to make.

Highlight: Aside from what’s already been mentioned,

This is some Priesthood Session-level admonishing here. Though it could certainly be seen as hypocritical, I think that the Beastie Boys had matured enough to figure out that their earlier shenanigans were indefensible and it was time to move influence the culture for the better. Making it more impressive, this song came out in 1994 when rap was dominated by James Brown samples and Gangstas.

Things get weird when: Flute loop. What a great band.

Likelihood of being played at a Mormon dance: 4/10 By far the most dance-friendly song on the list thus far. But it’s unlikely.

Leave your suggestions and feedback in the comments or email me here: isajoke911@yahoo.com