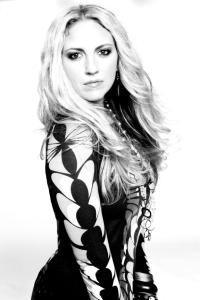 Annelise LeCheminant brings an eclectic musical landscape to the table. She definitely doesn’t fall into her own ruts like many musicians- she is constantly experimenting with new sounds and new ideas. Her music is mature and universal, and the listener is benefited through her self-discovery. There truly is “a song for everyone” in her catalog. She will be having a CD release party for her new album Driven on January 10th, so go see what the fuss is about. It will be held at:

Tickets are available at www.arttix.org, all ArtTix locations, or by calling 801-355-ARTS.

Your bio mentions that you arrived “late” in the music scene. What does that mean exactly?
A: Most people in the industry start out pretty young, teens or early 20s. It wasn’t until several years after college that I decided to pursue my music. Which ended up being the perfect time for me. I had a college education under my belt as well as experiences and maturity that allowed me to keep a level head about my music career. I’ve had a lot of different jobs over the years and it’s amazing how most of them have prepared me and given me skills that I use to create & promote my music.

How did your family react to your desire to be a professional musician? Is your family musical?
A: My family was and is really supportive. My mom drove with me to Nashville when I moved. My parents have always encouraged me and my siblings to make our own decisions, develop our own talents and chase our dreams. They were great at instilling in us a sense of confidence in our decisions and desires. Each member of my family has had some musical training but none of them have pursued anything like I have. I took violin lessons at 4 years old because my older sister was playing the violin.

What strikes me about your songs is that they seem to be very personal and passionate, but the point of view is from what seems to be an average young woman. The emotions expressed seem to be universal. Is this what you seek to do as a lyricist?
A: I’m not the kind of songwriter who can crank out a song everyday. When I write it’s usually when I’m feeling intensely about something; frustrated, happy, or when I believe in or have been affected deeply by something. I think we, at some point in our lives, experience very similar feelings to our fellow humans. Thank goodness or we’d feel pretty alone sometimes. I think when people relate to my songs it helps me remember that I’m really not the only one who feels a certain way and hopefully I’m helping them realize the same thing. The payoff is when people tell me which songs helped them through a trial. All it takes is one. Although to be honest, I probably write kind of selfishly because I’m mostly thinking about how I’m going to creatively express what I’m feeling and I’m just trying to get it out of my head.

What other themes can we expect to hear in your songs?
A: I write about chasing dreams, not letting things get in your way, love, lost love, people who work hard, incidents in my life, chocolate!

How does your faith influence the music you write, and what is your testimony? Do you consider your music like a “mission” of sorts?
A: My music is definitely influenced by my faith and beliefs. I was raised in the church but I’ve had to find my own testimony which is deeply rooted. There have been many times in my life where I’ve had to rely on the hand of God and I can’t deny His existence nor can I deny Christ’s.
I’m not sure how much of a “mission” my actual songs are but I do feel like my life is a mission. I get an opportunity to rub shoulders with a lot of people who have questions about life, Christ, God, the universe. I’m not the preachy type but I live my life in a way that people know what I believe by my actions. I’m close friends with a lot of these people and when they ask questions I answer them the best I can. People who listen to “LDS” music are already LDS. This is one reason I’ve chosen to not market myself through the LDS distribution channels. I’d rather be more mainstream, have positive, real life music that everyone of all faiths would listen to and hopefully have a greater influence for good.

There are a lot of underlying gospel principals in my music if you look for them. “Surrounded by the Light”, “Driven”, “You Never Know” are a few.

Your music seems to have lots of influences from different musical genres and from around the world. Tell us about writing and recording music with such a mixture of influences.
A: My sister complained to me once about a band whose songs all sounded alike, this was when I was probably around 11 yrs old. That stuck with me and I purposefully mix it up. There are so many options in music, why stick with one and have each song sound like a variation of the other? There are a lot of genres that I like so I try to pull from them to create something that is a little different from everyone else. My first album is probably more like listening to a soundtrack from my life.

On this new album, I’ve added a technology called “binaural audio” which is three dimensional sound. I collected sounds from all over the world in my travels and incorporated them into my songs. When you listen through headphones the sounds almost feel like they’re actually happening around you. The album truly comes alive. It’s really fun to work with other elements rather than just notes & traditional instruments. The sounds we hear around us everyday are the real soundtrack to our lives.

Any favorite songs to perform live?
A: I love performing “Fall” because it’s probably the most universally relatable song I have. People really get into it and I think they’re feeling the same way I am when I sing it. I also like to perform “The Race” because it rocks!

What secrets do you have to share about your music, just for the Linescratchers reading at home?
A: Secrets? Hmmm… I sometimes write in a secret code so I can say the things that are really scary and vulnerable to share with the world with out telling the real story.

I named my GPS Minerva, after the woman at the end of “Same Man, Different Person.”

Another secret is it’s a lot of hard work, it’s believing in your self even when you don’t believe in yourself or when others think you’re crazy. It’s constantly pushing your boundaries and trying something new. It’s balancing all of that so you get plenty of rest, exercise and good nutrition because if I get sick my instrument is broken.

Tell us about the albums you’ve recorded. Do you feel that each album has a different “tone” or idea behind it? Which would you recommend to someone unfamiliar with your music?
A: Each album definitely has its own personality. Christmas, for instance, is a mix of my favorite Christmas songs. I wanted to do arrangements that were different but wouldn’t take away from the spirit of the songs. I’ll actually be re-releasing Christmas with 3 more songs on it eventually. You Never Know is a charming eclectic album and probably has a song on it for everyone. I would recommend someone starting with Driven probably because it’s my favorite right now and the binaural audio makes is breath, almost literally.

How can readers find out more about your music? If they like it, how can they support you in what you do?
A: You can visit www.annelise.us, or www.myspace.com/AnneliseLeCheminant

One thought on “Annelise LeCheminant”